3rd Grade Teachers – Make an appointment to schedule a tour for your students studying Local History! Some classes bring their lunch to picnic in the adjacent park. Of course all other grades are also welcome! Phone 714 562-3570 or 714 521-1887 or contact us through this site. Hours of operation vary, depending on the availability of volunteer docents. Call ahead to be sure someone is on duty for your tour. NEW! Take an Online Photographic Tour of the Houses 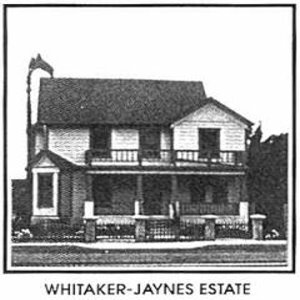 The story of the Whitaker-Jaynes House coincides with the history and development of Buena Park. The House was built for Andrew W. Whitaker when he arrived from Indiana in 1887. His brother, James A. Whitaker, a prosperous wholesale grocer from Chicago had bought 690 acres of land here in 1885 to establish a cattle ranch. A land agent for Santa Fe Railroad, named George Fullerton, convinced Whitaker to subdivide his property instead. Since Whitaker’s acreage bordered the rail route, the deal was consummated in exchange for a rail terminal to be built later. So on June 17, 1887, Whitaker registered his platted map for the town of Buena Park with Los Angeles County (Orange County was not formed until 1889).

Twenty acres of land within the subdivision was sold to one of James’ two brothers, Andrew. Andrew was an experienced farmer who later helped James operate the Pacific Condensed Milk Company after a local group of investors took over its operation in the early 1890’s. This company was Orange County’s first nonagricultural industry and was commonly referred to by its brand name as the Lily Creamery.

J. Harry Whitaker, Andrew’s eldest of four sons, worked for his father’s older brother, Harry A. Whitaker, who started the town’s general store. Later J. Harry brought the store from his Uncle Harry A. and subsequently became the town’s first Postmaster in 1895 with the post office being in the store. J. Harry lived in the house with his parents from 1887 until 1889 when he married his Uncle James’ adopted daughter, Lillian. After Andrew died in 1903, his wife sold the home to the I.D. Jaynes Family and moved to Los Angeles.

Isaac D. Jaynes was a successful rancher and fruit grower credited with being the first to plant citrus in the area. Jaynes achieved recognition as a U.S. Army officer in Europe during World War I and after the war he was active in the Officer’s Reserve Corps. Upon returning home, Jaynes began developing commercial and residential properties within the City and was a] so appointed Buena Park’s Postmaster in 1922. I.D. Jaynes and his wife, Edna, had six children, three of whom were born in the house.

After owning the house for decades, Jaynes undertook a major remodeling circa 1925 which added a bay window to the dining room and replaced a single window in the kitchen with three. The original porch was also replaced with a stronger one.

The Jaynes family lived in the house until 1965 when the City of Buena Park bought it and restored it. The surrounding land was made into a park. The house was moved in 1994 to become the cornerstone of Buena Park’s newly established Historical District. 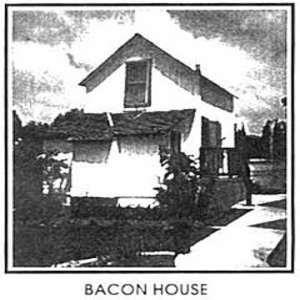 The Bacon House was built about 1884 by an unknown squatter in a remote area of Abel Stearn’s Rancho Los Coyotes. The land was being held in trust for a minor, named Fredrick B. Ramige of Calhoun, Iowa, who had inherited it. At maturity in 1894, Ramige sold ten acres of land and the house to Jacob Hamm for $625. Hamm worked for the Southern Pacific Railroad in Banning and had married the Widow Shance whose brother was plant manager for the Pacific Condensed Milk Company – more commonly known as the Lilly Creamery.

About 1900, Hamm traded his equity in the land and house for another house in Buena Park owned by Robert D. Bacon. Bacon who had come to the area in 1888, used these ten acres as the nucleus for what was to become a successful and progressive farm. Bacon married Agatha Van Loenen in 1905, and their three children, Mildred, James E., and Robert W., were all born in the house. By 1913, a more Substantial home had been built on the same property, so the original house was used as a storehouse. Bacon served as a trustee of the Centralia School District and worked to form a storm district for the control of the Santa Ana River.

After the Bacon Family gave the house to the City of Buena Park in 1976, it was moved to the Whitaker-Jaynes Estate Park where it was restored to commemorate the United States Bicentennial. The Bacon House is a rare surviving example of the single wall method of construction. The house is furnished with many original Bacon Family heirlooms.

The Bacon house was moved in 1994, along with the Whitaker-Jaynes House, to become one of the cornerstones of the newly established Historical District

Today, these homes are at the center of the newly formed Historic District between the Stage Stop Hotel and the First Congregational Church.

Both house museums are furnished much as they would have been at the turn of the century and are open to the public by the Buena Park Historical Society.

The Whitaker-Jaynes and Bacon House Museums are open to the Public by the Buena Park Historical Society, FREE of charge. Call for appointment or for current hours.